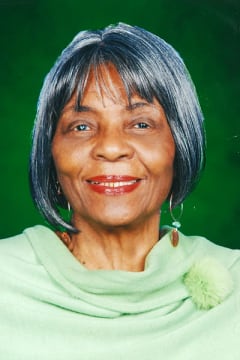 When Midwestern University in Wichita Falls, Texas integrated in the mid 1950’s, Clara enrolled and commuted each way daily to classes. She earned her Bachelor of Science degree in Elementary Education in 1957, becoming the 2nd Black person to graduate from that institution. In 1960, Clara earned her Master in Elementary Education from Midwestern University.

Clara was passionate about teaching and mentored many new teachers throughout her 37 years in education. She was known for her beautiful child centered classrooms, superb musical ability and her philosophy that “every child can learn.”

As the biggest fan of her daughters in their activities, Clara attended every competition and game from elementary school through college. She also took great pride in the professional accomplishments of each daughter as they both became educators.

Clara was preceded in death by her husband, Bob Hale aka Hale-O the Magician, her daughter, Dr. Gwendolyn Hale Samples and her grandson, Robert Carson Samples.

Please share a condolence, photo or memory of Clara. We welcome all condolences that are positive and uplifting that will help family and friends heal.