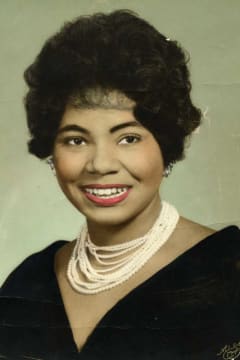 Florine Delores Rauls Oliver went to her heavenly home on January 3, 2022 in Wichita Falls, TX. She was the first born to Charles “Charlie” Rauls and Jo B Slaughter Rauls in Waco, TX on December 9, 1941. She graduated from A. J. Moore High School in 1958 where she sang soprano in one of the BEST High School Chorus in the state. She later attended Paul Quinn College and graduated in 1962 with a Bachelor’s Degree in Psychology.

She met and married the love of her life, Airman 1st Class, Henry Oliver, on June 30, 1962. To this union two wonderful children were born.

Florine remained stateside to advance her education at Prairie View A & M College when Henry was sent to Japan. Shortly thereafter, she joined Henry at Langley AFB, VA and taught school in Hampton, VA until her daughter, Pippa, was born in 1967. She and Pippa followed Henry to R.A.F Alconbury for a three-year assignment. Their son, Charles was born in 1969 in England. After leaving England, they found home at Webb AFB in Big Spring, TX. While at Big Spring, Florine was supervisor for the Welfare Department in Howard County.

In 1975, Henry and the family were assigned to R.A. F Upper Heyford, England. After a tour there, Sheppard AFB became their home and Henry retired in 1980. Following the 1979 Tornado in Wichita Falls, Florine was employed by FEMA. She assisted many families and relocated them if needed.

Florine was a Christian and was a member of Sheppard AFB Gospel Chapel. She attended the services regularly and participated in many activities at the church.

Florine was a loving wife, mother, grandmother, sister, aunt, cousin and friend. She will be dearly missed by all who knew and loved her but especially her husband, Henry.