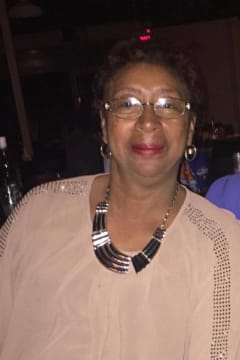 Wells Funeral Home is inviting you to a
Live Stream Service of:
Francine Hampton

Francine was the second child from Ernest and Frances Thompson’s union, and oldest girl of the four siblings. At an early age she accepted Jesus Christ as her Lord and Savior, and was baptized as a member of the Piney Grove Missionary Baptist Church. As a dedicated and faithful member she served the church there until she was married and moved away from Statesboro Georgia.

On December 21, 1972, she was joined in holy matrimony to Jerry Hampton, and to this union three children were born. Being a military spouse, she traveled the world and worked in numerous occupations during those service years. Afterward, they made their home in Wichita Falls, Texas. She was a dedicated and long-time employee of Levi Strauss, and later retired from AT & T. After retirement, she spent her time as a dedicated wife, mother and grandmother. Francine loved to cook, sew, play cards, watch all western shows along with NCIS, Chicago MED, Chicago Fire, Chicago PD, just to name a few. In addition, she was a Past Worthy Matron and long-time member of the Order of Eastern Stars and Heroines of Jericho.

On Sunday morning, September 5, 2021, the Angel of Mercy entered her room at the United Regional Hospital and carried her home to be with the Lord. She is preceded in death by grandparents, Ezell Brown Sr. and Omie Mae Hall Brown; James Thompson and Sarah Rebecca (Bessie) Pendergrass Thompson; parents, Ernest Thompson and Frances Brown Thompson; one great-granddaughter Alayna Rae Hampton.