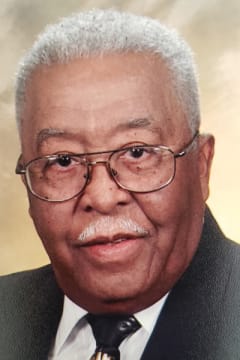 Henry Dalton White was born August 3, 1932 in Como, Texas Hopkins County. He departed this life on October 29, 2020 surrounded by his family. His parents were Helen Gregg and Marvin White of Como, Texas.

He was baptized at an early age at the Independent Baptist Church in Sanfield, Hopkins County where he learned to love God and follow His Word.

While being raised on a farm by his grandparents he raised livestock, and sold vegetables produced from their garden. He learned to appreciate the hard labor it took to improve his lifestyle and this guided his interest in entrepreneurship. When he graduated from Junior High School, the black high schools in the area lacked the funds to send buses out far enough for him to have a ride to school. Determined to get a high school education, he moved to Pittsburg, Texas where he managed the kitchen at Center Point High School, an all black boarding school where most of the students were problem juveniles. In return for his work, he was provided with the high school education he wanted. A year after graduation in 1949, Henry heard there was work in Wichita Falls so he moved here. By 1950, he and his new bride, the late Bobbie Johnson White were married and raised 3 children. He was working as a cowboy on the River Crest Ranch for J. H Allison and at Kemp Court as a maintenance man until 1960. Sears, Roebuck, & Co., hired him to work in the maintenance department. After 2 years, he became a salesman and gained a better lifestyle for himself and his family. Because he never met a stranger, he built great relationships with all of his customers, Henry became the first black retail salesman in the white Wichita Falls business community.

In 1965, he and his wife opened the Mother Earth Plant Shop and ran the family business in their home while he delivered mail for the U.S. Postal Service (23 years) and worked for Bethania Hospital (17 years) to build the floral business they created. Henry added that special touch to every order that was delivered from his shop. As a floral designer, he continued serving the community after Bobbie’s death in 1974.

In 1979, he married Frances Thomas. They were happily married for 41 years. He invested in the Eastside community by purchasing various properties and operating the H.D. White Apartments on Sullivan Street to help others. A friend to many and he witnessed to everybody about serving God. His religious faith was of paramount importance to him. He loved church! He loved reading the Bible, Christian literature, and listening to gospel music. A strong Christian and active member of the Pilgrim Rest Baptist Church under the pastoral care of the late Rev. W. O. Everett, served as a Chairman of the Deacon Board, Trustee, Sunday School Superintendent, Baptist Training Union Director, created the Senior Men’s Sunday School Class, named Deacon Emeritus in 2012, Brotherhood member, and he was the last surviving Deacon/Trustee of the Pilgrim Rest Baptist Church building cornerstone. He sang in the Senior Choir, Male Chorus, and Combined choirs. After retiring from Sears and selling the family business, he remained active in his church and community until his health would not allow him to do so.

He was preceded in death by his parents, his sons, Sgt. Jerry Lyn White and Gary Don White, and daughter, Doris Thomas Bryant.