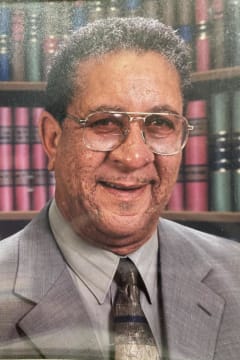 Howard Lee Locklin was born September 10, 1930 in Rockdale, Texas to Hildred and Corine Locklin. He moved to Burkburnett in 1935 and began school at Booker T. Washington Elementary. He later attended and graduated from Booker T. Washington High School in Wichita Falls, TX

He served in the US Army both stateside and overseas from 1948 to 1956. He attended LaSalle University, Pierce Electronic School and obtained a degree from Draughn’s Business College. He returned stateside and was discharged from the service at Ft Chaffe in Ft. Smith, AK, where he met the love of his life, Helen Marie Thomas. They were married and moved to Burkburnett in 1956. They had three children, one of whom died as an adolescent.

He graduated from Evans Barber School in Ft. Worth. He worked as a barber at Sheppard Air Force Base, (SAFB), Mrs. Lena’s and JC White's Barber Shop and later in life at Jimmy’s and Frankie’s. He also worked in retail as manager of Sporting Goods at Gibson’s and later as assistant manager at Anthony’s. Many acknowledged him for his personal service and volunteer heart.

He was the oldest black male living with firsthand knowledge of the historical events of interest about black citizens of Burkburnett that occurred from 1935 to his death. He is actively involved in his church, and civic activities.

He became a member of Providence Baptist Church in 1958. He was ordained as a Deacon on August 22, 1965. He became Vice Chairman of the Deacon Board from 1986-1996 and Chairman of the Deacons from 1996 -2010. He was actively involved with the Deacon Board until his health began to fail the last year of his life. He actively served as Sunday School Superintendent, Benevolent Chairman, BTU President, sang in several choirs, chaired numerous Brotherhood Prayer Breakfast events, cut grass and was all around Mr. Fix It at the church.