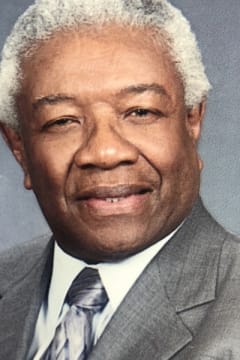 John Horace Dibble, 94, was called home on Sunday June 14, 2020 in Wichita Falls, Texas. He passed away peacefully, surrounded by friends and family. John was born in Italy, Texas to the late John Elmo and Mattie Bennett Dibble on May 18, 1926. The family moved to Marlin, Texas when John was three months old. He attended and completed Booker T. Washington High School in Marlin in 1943, and entered Prairie View A&M University in September 1943.

John married his loving wife Louise in October 1952. They were happily married for 67 years. They lived together in Wichita Falls for the past 63 years. John and Louise joined Mt. Pleasant Missionary Baptist Church where he is served as a deacon. He was a member of the Senior Choir for 45 years. He also served in the capacity of Sunday school teacher, Boy Scout leader and financial secretary of the church.

John was very involved in civic and charitable organizations throughout the Wichita Falls area. In May 1988, John was elected to serve a six year term on the School Board of the Wichita Falls Independent School District. John was an instrumental contributor to the Emanuel Davis overpass on the eastside of Wichita Falls and worked extensively with the East Branch YMCA.

He is survived by his loving wife Louise, son Alan of Dallas and son Eric (wife Mary) of Frisco, Texas and two granddaughters, Emma and Erin.

Please share a condolence, photo or memory of John. We welcome all condolences that are positive and uplifting that will help family and friends heal.