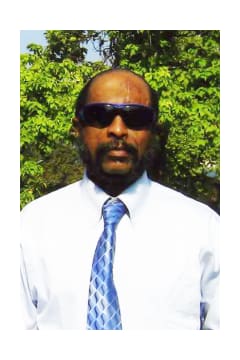 Melvin Anderson Robinson was born of the union between George E. Robinson and Mattie Vernell Robinson on July 4, 1954 in Wichita Falls, Texas. He was raised in a Christian home throughout his youth. Melvin attended Washington Elementary; Eastside Junior High followed by Booker T. Washington for his freshman year upon integration. Melvin attended and completed Wichita Falls High School as the class of 1972 where he was an avid swimmer on the Varsity Swim Team.

Then he continued his education attending Sol Ross University in Alpine, Texas before ending his college experience at East Texas State University in Commerce, Texas.

After returning to Wichita Falls, he was employed by PPG Industries, Lone Star Tool, Gates Rubber Company, D L Enterprises Moving Company, and was last employed at Beacon Lighthouse for the Blind.

What stood out of most about Melvin was his sense of humor. He loved children and they loved him. They thought he was the funniest guy in the world. You could hear his voice and just know that had to be him without looking. He enjoyed fishing, hunting, and taking trips with his children, nieces, and nephews.
Melvin was proceeded in death by his Wife Winnie Taylor- Robinson, Father George Robinson (Faye) and Brothers, Marvin E. Robinson and Monroe Robinson.

May the Lord comfort you and give you peace.
- Sharri Torrence
May the Lord keep the family lifted and safe in His loving arms
- Mae Moffitt