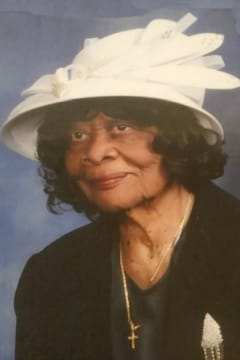 Susie Norris Gordon Rose was born on August 22, 1915 to the late Joe Gordon, Sr. and Degie Smith Phillips in Detroit (Red River County) Texas. At an early age she attended Detroit Public Schools. Her parents moved to Clarksville, Texas (Red River County). She then attended Hopewell School in Clarksville. She also attended Hopewell Baptist Church where she joined at an early age.

She married William Arthur Brown. The family moved to Wichita Falls, Texas. There, she united with Pilgrim Rest Baptist Church under the leadership of the late Reverend L. L. Gordan. In 1943, she and her husband moved to Los Angeles, California and she began work at The May Company. Later, she began work for the late actress Mary McAdoo Hussey in Hollywood, California. The daughter, who lives in Edmond, Oklahoma remained in contact with Susie throughout the years.

After many years, Susie married Theodore Murdock who died some years ago in Los Angeles, California. She later married Albert Rose. She joined and became a faithful member of St. Andrews Baptist Church in Los Angeles, California. She and her special friends Katie, Mary, and Esther were active members of St. Andrews. Albert’s health began to fail and he passed away. In 2006, Susie moved back to Wichita Falls, Texas to live with her sister, the late Sally Mae Brown, who was in poor health and passed away in 2006.
Preceding her in death were: Her parents Joe Gordon, Sr. and Degie Smith Phillips, two brothers, Charles W. Gordon and Joe Gordon, Jr., three sisters, Margaret Gordon, Rosie Gordon, and Sally Mae Brown, one niece Degie Washington, three nephews, David Gordon, Billy Young, and Kevin Sanders.

She joined St. Matthew Baptist in 2006. She has been a faithful member under the leadership of Pastor Doris Smith. She has served as Mother of the Church and one of the Hat Ladies. She enjoyed dressing fancy with her hats every Sunday. Her hobbies were receiving and reading Birthday cards. She did not like to send “Empty Cards”. She was a “giving person” and if she sent you a card, she would always put something in it. She also enjoyed baking cakes, cookies and other fancy dishes in her younger years. As Mother of the Church, Pastor always remembered her on special occasions and with the Lord’s Supper. She loved her church and when her health began to fail, she paid her tithes and offerings. She loved her Church. Her 105th birthday was a Gala Affair with Pastor, church members, family, and friends.

She loved my Peach Cobbler and complimented me on my homemade crust. She loved Brick because he spoiled her deeply respected her as as our special Mother! Our hearts are truly saddened but blessed that she is a part of our lives. She loved to hear our Great Granddaughters Villayna and Liiiy sing! Our sons George and Von loved visiting with her when they were in town. WE LOVE YOU MRS.SUSIE!
- Gwen Brickhouse

Mrs Rose you will be miss , I enjoyed our talks, laughing and your fancy styles (hats also ) Connie Corbin
- Connie Corbin